(SPOILERS for Doctor Who Series 3-6, the works of Edward Eager, and Meet the Robinsons)

It has occurred to me recently that I don’t talk about books enough on this blog.

Considering that books were among my first loves, this oversight just won’t do. Of course, all types of stories are important, and I’ve talked about good old Harry Potter more than once. But there’s more than just Harry Potter on my bookshelf that deserves spotlighting!

So, like last week, I’m digging into my childhood to analyze an often overlooked favorite, in comparison to a pop culture phenomenon. 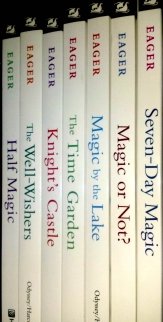 In the 1950s, dramatic writer and lyricist Edward Eager, having a difficult time finding books to read to his son, began writing children’s books in the style of E. Nesbit – stories about ordinary children who stumble on some kind of quirky magic (the first book, for example, involved magic that worked by halves – the children had to wish for twice as much of something if they wanted the wish to work completely) that they then use to go on fantastic adventures through space, time, and even literature, referencing everything from One Thousand and One Nights to Little Women. Along the way, the children typically learn to use the magic wisely, and resolve conflicts in their ordinary lives.

Eager’s tales of magic spanned seven books in all (the last published two years before his death in 1964), but he did not use the same cast of characters across all seven. At most, a given cast of children would span two books. However, the siblings of Half Magic (1954) & Magic by the Lake (1957) and the cousins of Knight’s Castle (1956) & The Time Garden (1958), are connected by more than just their writer.

Let me outline the trajectory for you quickly:

Half Magic, the first in the whole series and set in the 1920s, introduces siblings Jane, Mark, Katherine, and Martha. The following book, Knight’s Castle, introduces 1950s siblings Roger and Ann, and their cousins Jack and Eliza – they are the children of Martha and Katherine, respectively. Now, this was probably not the first series to involve the children of previous characters, and it certainly was not the last – Tamora Pierce’s Daughter of the Lioness series and Legend of Korra come to mind.

But it is with the following books, Magic by the Lake and The Time Garden that Eager plays with the generation gap in a way that I wish I could see more often.

Magic by the Lake returns to the 1920s, with Jane, Mark, Katherine, and Martha spending the summer at a cottage by a lake, discovering that on certain days they can use the lake water to make wishes. Late in the novel, Martha gets her and her siblings in a pickle with cannibals on a deserted island (And I apologize for the author’s sake – it was the 50s, these weren’t the most progressive novels. Not terrible, but not the best), leaving them tied to totem poles awaiting their doom. The older three fall asleep, and awake to see Martha talking to three other children.

And she introduces them as Ann, Roger, and Eliza.

Basically, imagine Back to the Future if we’d seen the whole thing from George and Lorraine’s perspective. The children proceed to have an adventure together, before Ann, Roger, and Eliza mysteriously disappear, their future mothers none the wiser to who they are… and the audience none the wiser as to how they got there!

It’s a pretty good hook for a sequel, huh?

You can guess from the title of the following book, The Time Garden, how it happened. The cousins go to stay at a house in the country while their parents go to London for the premiere of a play written by Roger and Ann’s father where they discover the thyme plants in the garden can actually help them travel through time – a literal time garden.

At one point, the children try to use the thyme to see their parents in London. But, not making the wish specific enough, they end up on the island in the past, the whole scene from Magic by the Lake playing out from their children’s perspective.

Most of the dialogue is the same, though some lines are switched around or alluded to in order to avoid complete repetition of what devoted readers would have seen before. What is more interesting is comparing each group’s perspectives and expectations, how each version of the scene plays on the other. For example, compare these two passages:

“’Pooh!’ said the dashing one called Eliza. ‘We don’t need any old magic to get them off those spears. We have our two hands, don’t we? And our crude childish strength?’ And digging in the sand suddenly, she uprooted Jane’s spear and Jane fell heavily to the ground knocking all the wind out of her. She always maintained afterwards that Eliza had done it on purpose.” Magic by the Lake, 135-136

“…action spoke louder than words in the soul of Eliza. To dig the point of Jane’s spear from its confining sand was the work of but a moment. Jane fell suddenly and heavily to the ground. And if Eliza forgot to warn her on purpose, so that all Jane’s wind was knocked out of her, at least Eliza was sorry for it afterwards… And it would be something to remember secretly in the future, whenever Aunt Jane started ordering her around in her purposeful way!” The Time Garden, p 122-123

Questions posed in the first version of the scene – Did Eliza let Jane fall on purpose? – are answered in the second. Feelings only alluded to in the first become clearer in the second. But at the same time, the children of the future learn something about the past, as their parents never told them of the magic adventures they had as kids. 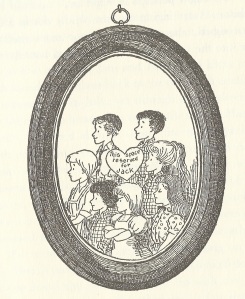 I suppose what I find interesting about these scenes is that we get the same scene from different perspectives across two books, two generations. Normally in time travel stories, especially involving multiple generations in a family, we only see one perspective – either that of the visitor(s) (i.e. Back to the Future), or that of the one(s) being visited (i.e. Meet the Robinsons*). Or if multiple perspectives are involved, we don’t actually see the scene play out again – it’s only alluded to, such as in the Doctor Who episode “Smith and Jones,” when the Doctor proves he’s a time traveler to Martha by going back to before he met her. We see Martha meet him, from her perspective, before the events of the episode. But we don’t see him find her, from his perspective, in the past. With visual media, such things are usually too redundant, so it makes sense not to show them again.

Doctor Who does, however, play with revisiting scenes of the past in other episodes, most notably episodes involving Steven Moffat. Moffat enjoys the complications of playing with time travel for more than just history lessons and futuristic speculation, and frequently breaks the previous rule of the Doctor and his companions interfering with their own time stream – “Time can be rewritten” being the catchphrase during his era as head writer. Though such plots often get very overcomplicated very quickly, there are instances, similar to the scenes in Magic by the Lake and The Time Garden, where he pulls it off quite well.

My point in making this comparison is to say that, considering how popular Doctor Who is right now,

it would be cool if children’s writers could tap into this audience and create some more stories playing with perspectives and family timelines, as The Time Garden did back in the day (If anyone out there knows of any, let me know in the comments). And Doctor Who could learn from Edward Eager in terms of keeping the time travel easy to follow, as many have gotten frustrated with the increasing complexity of the Doctor’s timeline since Series 5. Or keeping such things contained to single episodes, as both of Eager’s novels kept the magical overlap contained to a single chapter, with no or little impact on the futures of Jane, Mark, Katherine, and Martha. Just my two cents.

Tune in next Tuesday for a new post! Learn more about the blog here, about me here, and resources here. Check out the links for related works and Pinterest boards in the sidebar.

EDIT 2/24/15: Check out more of my favorite time travel books for kids here:


* Lewis in Meet the Robinsons is technically the one that visits the future, but it’s his future son that visits him in the past first. Thus, he is the one being “visited.”