In today’s post, we’ll be comparing the TV shows The Flash (2014) and Static Shock (2000-2004) – which elements the two already share, and which, based on the progression of Static, might eventually show up in The Flash.

First, let me say I’m very pleased with the response to last week’s post! Even the Lizzie Bennet Diaries Facebook page liked it! So, thanks everyone for checking it out 🙂

So, yes, I’ve become a huge fan of CW’s The Flash. If you haven’t heard of the new show, I’d be very surprised – the trailer for the pilot went viral over the summer (see below):

An awesome trailer for an awesome show. I’m already a bit of a superhero fan (since it isn’t that far off from fantasy), but give me a superhero show with a geeky, intelligent hero, humor, heart, and an interesting story? Sold.

Now, this past week, The Flash teamed up with its parent show, Arrow, for a two-episode crossover event. The two shows have very different flavors, so seeing each cast in each others’ cities was an interesting meshing of tones and values.

But, thinking about superhero crossovers, there is one DC hero I would absolutely love to make an appearance on The Flash at some point – Virgil Hawkins, also known as the electric hero Static. The hero would fit in well, I think, as he comes from a world not dissimilar to Barry Allen’s… at least, if we’re discussing the animated series I got to know Static through.*

Static Shock ran on Saturday mornings on the WB (which later became the CW) from 2000-2004, and my brother and I were just the right age for it. It was one of our favorites, to the point that when I asked my brother what power he’d want his character to have in my stories, he said he wanted to be like Static. I ran with that, and the character has had lightning powers ever since.

(Yes, I base my characters off of people I know. Don’t judge me.)

Here’s a quick run down of the origin story, as inspired by the series and the original Milestone comics:

A few notes on the main differences between the comics and the series:

So, we’ve got a show about a geeky, lightning-powered superhero who was empowered by an explosion that changed his DNA – an explosion which changed a number of people into metahumans along with him, some with not-so-friendly intentions that the hero has to stop.

Let’s break this down a little further:

(Major spoilers from this point on) 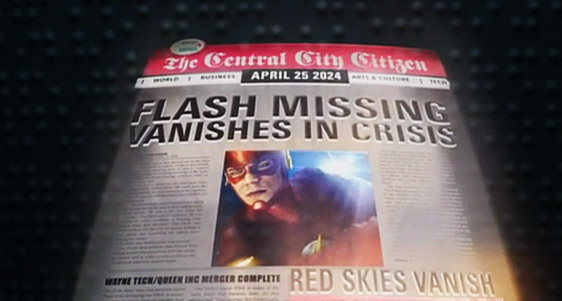 Because The Flash is such a new show, which has made a number of changes from comic canon already, it is hard to say exactly where the show will go from here. But, based on how Static Shock progressed, I’d like to make some predictions of things we might see (again, spoiler alert for Static, for the comics, and all aired Flash episodes):

So, I hope you guys enjoyed that! Just one quick Public Service Announcement – if you’re interested in writing some kind words for people who really need it this holiday season, I’m participating in the “12 Days of Love Letters” project from The World Needs More Love Letters. The idea is to send a handwritten card or letter full of love and support each day from December 8-19 to the person or people nominated on the site (or just send all twelve on the 19th). Hope you check it out!

Look for a new post next Monday. Learn more about the blog here, about me here, and resources here. Check out the links for related works and Pinterest boards, and leave a comment to let me know if you have any thoughts or ideas.

* Some readers may have first encountered Virgil in Justice League Unlimited or Young Justice Season 2.

** At a certain high speed, a number of other Flashes also emit lightning when running (see: Flashpoint, Justice League Unlimited’s “Divided We Fall”) but it’s still notable that 2014 Barry’s lightning seems to be a consistent feature

* **I’m aware that Caitlin Snow also has a super powered counterpart in DC canon, but considering she’s meant to become a super villain… I’m hoping the writers don’t go this route (I went through that with Morgana on Merlin BBC already, please not again!)

One thought on “Flash & Static – Lightning, Metahumans, and More”